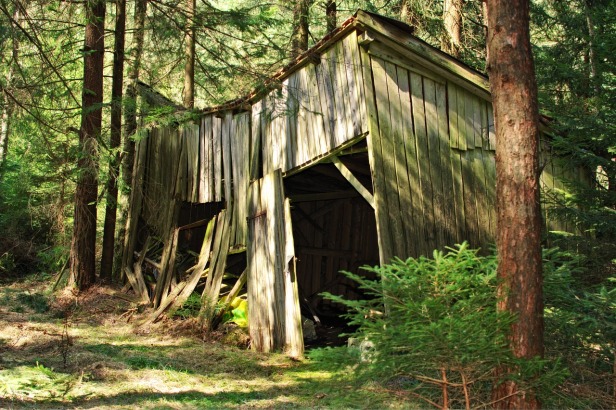 The tumbledown shed was not very sturdy but it made an excellent hunting blind. Jocelyn scanned the open meadow through her scope right to left, woodline to woodline. This was a favorite gathering spot for the creatures the survivors of the invasion as the Shoggoths. Jocelyn kind of liked the name even if they weren’t quite the amorphous masses Lovecraft described in his stories. They were big enough, though, had more tentacles than anything any human had ever seen before and could move faster than a tank. Shoggoths were the Invaders’ main weapon and they had killed millions.

A low rumble pulled her attention back to the present. A shoggoth was coming. From the feel of the way the ground shook under her prone body, it was a big one. She grinned. The village would eat well for a while! Trees groaned as something enormous shouldered past them, along the trail gouged in the forest by other Shoggoths before it. She listened carefully to the speaker on her shoulder. If this one was here to meet another, her hunting partner a half-mile away, tucked in a small cave that overlooked the woods, would let her know. Shoggoths had no stealth.

The rumble grew louder quickly and, as she expected, the monstrosity walked or stumbled into the clear. She drew in a long breath, held it, and centered the aiming reticle on what the Shoggoth used for a head. A small cluster of eyes on stalks searched in eight different directions at once, but none of them saw her.

Too bad for it, Jocelyn thought and pulled the trigger. A small rocket chunked out of the tube, then streaked toward the gigantic mass. A couple of seconds of flight and it struck — a flash of orange then a chest-thumping explosion that rattled the shed and made the old timbers creak enough that Jocelyn looked up to make sure the structure held firm. When she looked back, the Shoggoth lay still in the clearing, a gaping, smoking hole where its “head” had been.

She held herself quiet and listened for the moaning call of another Shoggoth. After a slow thirty count, she keyed the microphone and said, “Hunter Alpha to Cleaning Crew: Bingo.” She got two clicks in response, then two more that meant twenty minutes for the jeeps and trucks from the village to arrive. They’d carve up the Shoggoth and take it back to the village. Today’s harvest was huge, enough to feed the 215 people who lived in her village plus more that they could trade for the things they needed and even a couple wants. Maybe that generator over in Hughesville she had spotted the last time they had visited. She smiled. A generator would let them run the water pump they had found but couldn’t use. No more hauling water. No more sitting baths in the river. A shower, maybe. A hot shower, maybe.

Jocelyn stepped out of the shed, into the sunlight, and did a little dance.

I wrote this during the create-along that Sarah Werner hosts every Wednesday evening on Facebook and her Twitch channel. If you’re interested, she also hosts one on Friday. You’re more than welcome to attend. You’ll probably see me there as well.

I promise I don’t talk about my new book very much at all. Nope. It barely even comes up!