To This Base Use… 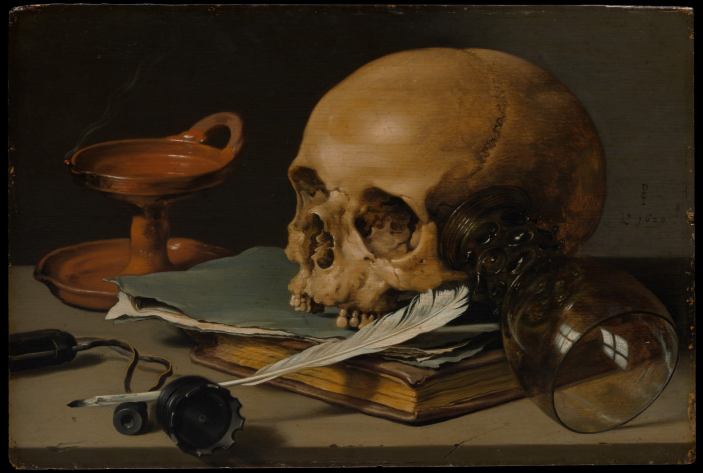 “Look at it this way. Metaphysically, you are very much alive.” The writer dipped his quill in the ink, pot and scratched out a few words.

“But I don’t want to be metaphysically alive. I want to be actually alive!” The skull’s voice was high-pitched with a whine that set the writer’s teeth on edge. It always had done so when skull had been a living person. Before the accident. And the vat. And the hours of polishing. And the herb treatments and incantations and…

“Well, you can’t, George. You can’t be actually alive anymore. This is the best you get. It’s this or oblivion, all right?” The writer had lost his patience hours ago, tired of the whining and whimpering and forever questions. George had been a nuisance when he was alive, always begging a coin for a drink or a pinch of tobacco, always with excuses about why he had never joined the Guild, about why he wasn’t writing great plays for adoring crowds. But he had an excellent ear for dialogue and the writer needed him. Badly. Even beyond death.

The skull sighed, a curious airy feeling in the writer’s mind that never disturbed the thin line of smoke from the candle wick. “Okay. Fine. So, what now?”

“Well,” said the writer as the quill continued to scratch out lines of dialogue, “First we figure out this gravedigger scene.”

I think the ending of this week’s story is a little more “fade to black” than I really wanted it to be but since I blew through the word limit I set for the Friday Fiction prompt stories (play along!) a couple of weeks ago, I felt obliged to stick to it this week. You should easily figure out my inspiration for the story, which came from an idle thought about where writers get their inspiration. I’m not quite so cool nor desperate enough to resort to using the disembodied spirit of an associate captured in his skull, but…some days it seems forgivable.