The Princess and the Frog Bandit 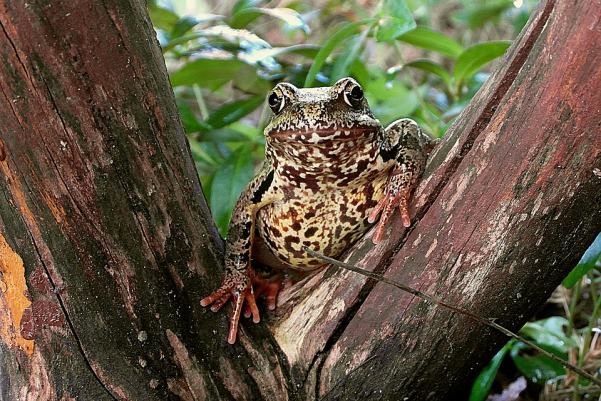 “Ho there,” yelled the frog from halfway up the tree. It leaned casually against a branch, a tiny gun in its hand.

Princess Bludmilla brought her motorcycle to a halt, a quizzical look on her face. “I’m sorry?”

“I am the great frog bandit! This is a robbery. I’m robbing you”. The frog leaped down and landed deftly on the road. It sauntered over, as well-armed and confident frogs are wont to do, and waved its gun. “Off the bike, if you please or even if you don’t. Also, your money and jewelry.”

“I think not,” said the Princess, with more than a little agitation. “You’re just a frog and I’m a princess and I’m pretty sure that little pop gun of yours wont hurt someone as large as I.” Princess Bludmilla, it should be noted here, was a troll, daughter of Fangric, King of all Trolls. She was tall and broad, and tougher even than the average troll, who might have felt some discomfort from a frog-sized pistol shot.

The frog turned its gun on a nearby boulder and pulled the trigger. The weapon hissed and spat a solid bolt of pure white which exploded the boulder with a great noise. Little bits of gravel clattered down all about them. The frog shrugged and gave her a look of smug satisfaction.

The princess gulped. “Well, then! I guess I will have to do what you say. But, I do have a question!”

“And what is that, Princess Soon To Be A Penniless Pedestrian?” The frog bandit asked, piling smug on top of smug.

“When I do hand over my motorcycle, however will you drive it? It is, as I’m sure you’ve noticed, quite large and powerful. And you are — and please excuse me for saying so — neither one.” The princess forced herself to be polite. She was not used to being treated rudely, especially not by an amphibian.

“Ah.” The frog frowned as he considered the Princess’s point. He would have had trouble enough driving a regular motorcycle, though his long legs would have reached what needed to be reached. The Princess’s motorcycle, however, was not just a troll motorcycle but custom made for Troll Royalty. It was larger and more sturdy than any motorcycle he had ever seen before. For the first time, his confidence wavered.

Princess Bludmilla saw the cloud of uncertainty pass briefly across his face and smiled. “Perhaps, frog bandit, we can come to an agreement. You see, I am quite unhappy in the Court of the Troll King. I do not wish to be a Princess to be seen and admired. I wish to be a Princess of Action! And you, my fine sir, present my opportunity.”

The frog bandit lowered his gun slightly, clearly taken aback. This was not going as he had planned. “I’m sorry,” he said. “Your…opportunity? I’m the Frog Bandit. I do not provide opportunities. I seize them.”

The Princess smiled, her wide face beaming. “But you do, and you are wonderful to do so!” He puffed up a little bit at the compliment and she continued, with increasing enthusiasm. “Listen, Mister Frog Bandit. You have a gun that can explode the mightiest rock and you know the ways of banditry. You set a fine ambush for me and took me completely by surprise. Me! The Princess of Trolls! But you need a way to get around to practice your banditry, which I have, and you need someone who knows the ways of the wealthy and influential, which I do.”

The last part, in particular intrigued the frog. His banditry had hit a plateau recently, as one could never know whether a passing traveler carried a bag of gold or a worn half-penny and a crust of moldy bread. He had encountered far more of the latter than the former and very much wished to increase the efficiency of his banditry.

He tilted his head toward her. “How would this arrangement work, Princess of Trolls?”

“We would travel together as partners. You would teach me banditry and how to set clever ambushes. I would teach you where to find the richest and most unobservant people to rob. Also, we would travel on my motorcycle, which we would have to disguise, otherwise everyone would know who I was.”

The frog nodded. “Clearly, we would have to do that. And you would need different clothes. And perhaps a weapon of some sort. For striking people at close range.”

She nodded with enthusiasm! “Yes! I can use a club very well! My father insisted I learn how to fight as a proper troll.”

The frog considered her offer. “Very well,” he said and holstered the gun. “Partners. Fine. Shall we shake on it?”

“Oh, by all means,” the Princess said, with a rapacious gleam in her eyes that might have caused the frog bandit to draw his gun again had he seen it. He did not because he was short and she held her chin up, as a haughty princess might but also as someone who was hiding treachery might.

He stepped forward and extended his hand, expecting her to take it and shake it. She did indeed lean down from her motorcycle and take his hand, but not to shake it. Oh, no. Not at all. She grabbed the frog’s hand and, before he even realized the danger, snatched him up and popped him into her wide mouth. After an instant of chewing and swallowing, the frog bandit was gone. Princess Bludmilla wiped her mouth with the sleeve of her coat, made a funny face, and coughed. The mangled metal pistol bounced and tinkled off the rocky road.

“Well,” she said. “The infamous frog bandit is no more. Won’t my father be glad! I wonder if he’ll give me the reward. I should like flames painted on the side of my motorcycle and the reward will just pay for it!” She revved the engine and laughed, and the sound of both echoed far down the forest road, a warning to any other bandits who might lie in wait. The Princess Bludmilla, daughter of the Troll King and Warden of the Roads was on patrol!

I bet you’ve noticed that I completely ignored that whole “stick to 100 words” rule that we put on the week’s writing prompt. You may have also noticed that this might be the start of a trend. Here’s the deal. I need to get into the habit of writing longer fiction. That’s not to say I’me done with 100-word stories. Far from it! I love writing flash fiction and even have a couple “back of the stove” ideas for collecting my 100-word stories and getting them into your hands in a different form than Web Page.

But! the time has come to go longer and, since I have this handy writing prompt right here every week, I might as well take full advantage, right? You should do the same. I’d very much like you to. I need more good stories in my life and I’m pretty sure you have a few to share. Might as well start here and now!

As for this story, it didn’t go in the direction I had planned. My first version ended with the Frog Bandit (whose name was probably Frisco) and Bludmilla becoming a fearsome tandem of highway thieves whose names passed well into legend. But Bludmilla, clearly, was having none of that! She’s a good Princess, interested in keeping the byways safe for travelers and also in getting wicked-cool flames on the side of her motorcycle!

So the story ended the way it did. And that, as they say, is that. This, by the way, is my first true foray into writing a fairy tale. I think we need more fairy tales in our world today. They bring a sense of wonder and deep history that sets us firmly in our past while giving us a clear view of what could be, if we only reached out a bit farther. The fairy tales of Tolkien made Middle Earth real. Maybe my fairy tales here make my worlds a little bit real, too. We shall see. I like fairy tales and you’ll probably see a few more of them as I figure out how to write them. Please tell me what you thought of this one and whether you’d like to see more like it!