The Greatest Laundry Day Ever 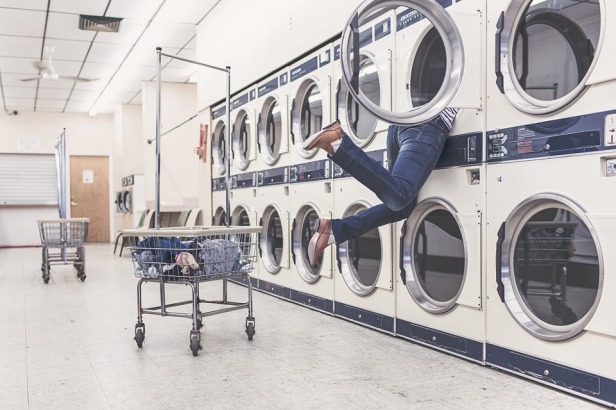 “The Chosen One”, Unit 32 transmitted. “She is here!”
A thrill ran down the bank of dryers as each thrilled to the entrance of the Chosen One, the one who cleaned up after herself, the one who never overfilled the fabric softener. Lights brightened and ceiling fans whirred hosannas.
Mary Jacoby, unaware of the excitement around her, wheeled her basket of wet clothes to the already-open dryer labeled “32”. She frowned at the crumpled dryer sheet left inside. “Lazy people”, she muttered as she reached in on tip toe…

…and was sucked inside to forever be Empress of All Laundromats.

I’m sorry I didn’t get the Friday Fiction story written yesterday. I had an early morning and had to travel a bit to get some work done on my car. Hey, when your pastor, who used to run his own body shop, volunteers to fix your broken window motor, you jump at the chance even if you have to drive a little bit to get to him. It beats shelling out 300-400 bucks I surely do not have!

By the time I got back, I was beat and needed a bit of a nap (Long week, folks. Not bad, but tiring). Toss in a fun evening obligation and, well, that doesn’t leave a lot of time for writing. It did, however, give me time to contemplate the story and this is the result of all that! Technically, I didn’t write this one in less than 30 minutes because I had hours to think it over, but the time from butt in seat to finish was less than 30, so I at least get partial credit. I rather like the story, drawn as it is from my regular weekly habits. What do you think of the ending? Too abrupt or juuuuuuust right?

The project at which I hinted last week isn’t going to happen very soon. I can tell you three things. First, it is a podcast. Second, it is a good enough idea that I want to get it right and it’s not quite there yet. Third, you’re going to like it when it happens. I’ve shared the idea to a couple or three trusted people and they went a little bit crazy over it, so there’s that.

Also, I’ve not forgotten my newsletter. I have one thing on the front burner, that should be done by Monday. After that, I can re-focus on getting the newsletter out on the regular (which also includes getting a handle on something that looks like a professional writing routine).

5 thoughts on “A Saturday Story: “The Greatest Laundry Day Ever””